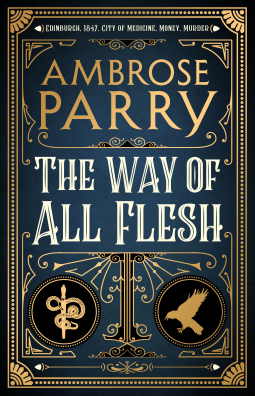 In the city’s Old Town a number of young women have been found dead, all having suffered similarly gruesome ends. Across the city in the New Town, medical student Will Raven is about to start his apprenticeship with the brilliant and renowned Dr Simpson.

Simpson’s patients range from the richest to the poorest of this divided city. His house is like no other, full of visiting luminaries and daring experiments in the new medical frontier of anaesthesia. It is here that Raven meets housemaid Sarah Fisher, who recognises trouble when she sees it and takes an immediate dislike to him. She has all of Raven’s intelligence but none of his privileges, in particular his medical education.

With each having their own motive to look deeper into the city’s spate of suspicious deaths, Raven and Sarah find themselves propelled headlong into the darkest shadows of Edinburgh’s underworld, where they will have to overcome their differences if they are to make it out alive.

Back in 1847, Edinburgh was a city split between the poor and rich. The rich lived in elegant houses in the New Town, whereas the poor lived in small dingy houses in the Old Town. In addition, back then Edinburgh was very much at the forefront of breakthroughs in modern medicine. The main character is Will Raven. He’s a bit down on his luck but he has managed to secure an apprenticeship with Dr Simpson (a well-known doctor in Edinburgh who deals with many of rich, well to do people). One night, Will stumbles upon the body of his dead friend, Evie. Everyone dismisses her as another dead prostitute, but something doesn’t sit right with Will.

He’s more than aware that in this city there will be men who will conduct dangerous experiments in an attempt to build their own reputations, without any regards for their patients. So when more young women are found dead in suspicious circumstances, Will becomes determined to find out what is going on,, even if it means putting his life in danger.

First of all, I LOVED the setting on this book. Edinburgh is by far the best city I’ve ever visited and I’m lucky enough to be able to visit it quite frequently. My Mum is Scottish and my Dad is Irish, but me and my brother were always brought up with more of an emphasis on our Scottish heritage, so Scotland will always be a soft spot for me.

Secondly, I’m a huge history geek. I actually studied the history of medicine at University, so this book was right up my street.

The imagery of Victorian Edinburgh was amazing. If you’ve ever been to Edinburgh, you can notice the split between the rich and poor areas almost straight away. It’s fascinating. The Old Town (the poor area) is full of winding steep staircases and small dark alleyways, so it’s not hard to imagine all the immoral and dangerous things that happened back then and this book portrayed it perfectly.

In addition, I found all of the characters really interesting. The authors had to focus on so many areas to make this book work. It’s historical fiction, based on medical breakthroughs in Victorian Edinburgh. I was a bit worried that it would focus too much on the context of that era rather than character development, but it all worked perfectly!