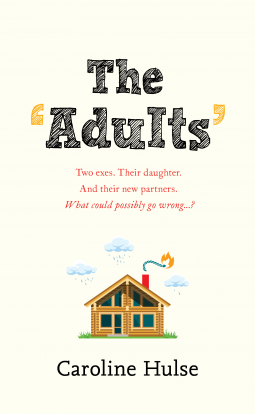 Synopsis: Meet The Adults. Claire and Matt are no longer together but decide what’s best for their daughter Scarlett is to have a ‘normal’ family Christmas. They can’t agree on whose idea it was, or who said they should bring their new partners. But someone did – and it’s too late to pull the plug.

Together the five (or six?) of them grit their teeth over Forced Fun activities, drinking a little too much after bed-time, oversharing classified secrets about their pasts and, before you know it, their holiday is a powder keg that ends – where this story starts – with a tearful call to the police…

But what happened? They said they’d all be adults about this…

This isn’t usually the kind of book I’d request an ARC of, but the premise sounded really interesting and I thought that it had the potential to be hilarious as well as awkward. And who doesn’t love an awkward situation when it doesn’t involve you?

Matt and Claire are split up, but they want their daughter, Scarlett, to be able to spend Christmas with both her parents, so they arrange a family holiday to a woodland resort for them and their respective partners. Claire brings her boyfriend Patrick, Matt brings his girlfriend Alex and Scarlett brings her imaginary friend Posey, a huge invisible rabbit who is very quick to judge other people.

The novel beings with a transcript of a telephone call confirming that someone has been shot. So, we instantly know that shit went down. But we don’t know how or why. The transcripts of witness statements and phone calls are scattered throughout the book, so it keeps you guessing right until the very end.

I’m glad that this wasn’t just a story about exes who want to get back together. Instead, it is dark, yet funny and full of awkward moments that made me cringe. The inclusion of Scarlett’s imaginary friend just adds to the whole ridiculousness of the situation that they find themselves in.

Saying that, I really didn’t like the whole Scarlett/Posey storyline. I felt that it kind of slowed the whole story down and was largely irrelevant. I also thought that Claire and Matt were better suited with each other than with their new partners, but I’m glad that this wasn’t the focus of the story.

Overall, I read the book extremely quickly and enjoyed it a lot because of how amusing it was. It also had all the Christmassy feels! Is it acceptable to be getting excited about Christmas yet!?

I’d recommended this book for anyone who wants a quick, easy Wintery read!

I received an ARC of this book in exchange for an honest review.
The Adults is released today!