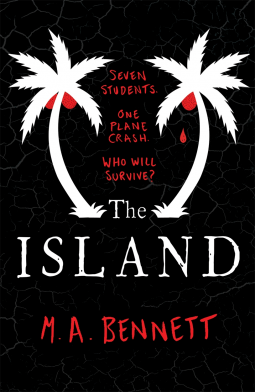 Synopsis: Link is a fish out of water. Newly arrived from America, he is finding it hard to settle into the venerable and prestigious Osney School. Who knew there could be so many strange traditions to understand? And what kind of school ranks its students by how fast they can run round the school quad – however ancient that quad may be? When Link runs the slowest time in years, he immediately becomes the butt of every school joke. And some students are determined to make his life more miserable than others . . .

When a school summer trip is offered, Link can think of nothing worse than spending voluntary time with his worst tormentors. But when his parents say he can only leave Osney School – forever – if he goes on the trip, Link decides to endure it for the ultimate prize. But this particular trip will require a very special sort of endurance. The saying goes ‘No man is an island’ – but what if on that island is a group of teenagers, none of whom particularly like each other? When oppressive heat, hunger and thirst start to bite, everyone’s true colours will be revealed. Let the battle commence . . .

So, here in the UK, there is a radio segment called ‘Desert Island Discs’. It’s a radio show where celebrities are asked to pick 8 music tracks, one book and one luxury item to take with them to a desert island. ‘Desert Island Discs’ is a major theme in The Island and I LOVED it!. Link, the main character, takes a guess at what his schoolmates choices might be at the start of the book and as the story goes on, we find out what they would have chosen.

Anyway, Link is a 16 year old American. He moved to the UK with his parents when they were offered lecturing jobs at the University of Oxford. Before moving to the UK, Link was home schooled but now his parents have enrolled him in a prestigious private school. The school works in partnership with Oxford University. His parents are keen for him to benefit from teachers with expert knowledge in their subjects, as well as socialising with other kids. So, they enrol him at Osney School.

Whilst Link is very smart, he does not have an athletic bone is his body, which is extremely unfortunate because Osney focuses of the students sporting abilities, not their academic knowledge. On the first day of school, Link has to run around the school grounds and the amount of time that he takes will determine his place in the school order. Link turns out to be the slowest runner and from then on, he’s at the bottom of the school chain. He is either getting picked on or completely ignored. He has no friends and he can’t see a way out from the living hell that is his school life. That is until a select few students go on a ‘life experience’ trip… but their plane crashes.

When the students find themselves stranded on the island, the group dynamic changes. Although Link isn’t good at sports, he’s read a load of books in his lifetime. So, he knows how to make a fire, he knows how to get food and he knows how to create shelter. And what’s more important on a desert island.. being a good rugby player or having the means to stay alive? Suddenly, Link is the person who the rest of the group depends on. But, unfortunately the power starts to go to his head….

Initially, I felt so sorry for Link… but then I couldn’t stand him. Normally, I really struggle to get into books if I don’t like the main character, but it worked perfectly. After years of having to put up with his tormentors, is it surprisingly that Link relishes being the one who has the power?

The development of all the characters is EXCELLENT. It shows how they react in group situations both at school and on the island and it shows how you don’t have to just settle for an allocated role in life.

I also loved the plot twist. I picked up on some hints that suggested there was something weird about the island, the ‘Big Reveal’ still shocked me.

This is the first book of M.A Bennett’s that I’ve read, and I can’t wait to read more!

Thank you to the publisher for providing me with an ARC in exchange for an honest review.
‘The Island’ is released today!