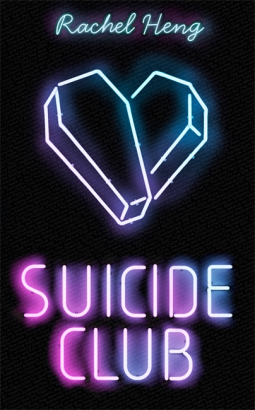 Synopsis: In this debut set in near future NYC—where lives last 300 years and the pursuit of immortality is all-consuming—Lea must choose between her estranged father and her chance to live forever.

Lea Kirino is a “Lifer,” which means that a roll of the genetic dice has given her the potential to live forever—if she does everything right. And Lea is an overachiever. She’s a successful trader on the New York exchange—where instead of stocks, human organs are now bought and sold—she has a beautiful apartment, and a fiancé who rivals her in genetic perfection. And with the right balance of HealthTech™, rigorous juicing, and low-impact exercise, she might never die.

But Lea’s perfect life is turned upside down when she spots her estranged father on a crowded sidewalk. His return marks the beginning of her downfall as she is drawn into his mysterious world of the Suicide Club, a network of powerful individuals and rebels who reject society’s pursuit of immortality, and instead chose to live—and die—on their own terms. In this future world, death is not only taboo; it’s also highly illegal. Soon Lea is forced to choose between a sanitized immortal existence and a short, bittersweet time with a man she has never really known, but who is the only family she has left in the world.

I really wanted to love this book because the concept is brilliant….. but I didn’t.

If you’ve read the above synopsis, you’ll see that the ‘The Suicide Club’ has a fantastic premise, but in my opinion, it fell short.

Firstly, I couldn’t stand Lea. She was just so wooden and at some points out right evil but everyone seemed to love her and give her pity, even when she was being a total ass. She never felt guilty for any of the evil stuff she did. She showed no life experience whatsoever and came across as being really simple minded, yet she’s this 100 year old top New York business woman. It just didn’t make sense.

Secondly, and this is the main reason why I didn’t enjoy this book, it lacked context.

I have NO idea what had happened to society that led them to their obsession with immortality.

I had NO idea on the context of the political environment.

And I really had NO idea why Lea was being treated like a criminal for getting hit by a car. Like, does no one in future New York ever have accidents?

There were just so many unexplained things which would have made the book so much better had time been spent on explaining the context. All of these thoughts were running through my head as I was reading it, so as I was getting into the story I found that I didn’t really care about the characters because I was constantly wondering about what the hell happened to the world to get it into this state in the first place.

I think this book needed a bit more of everything. It needed more context, more character building. The plot was really slow and it didn’t feel like it actually went anywhere. I honestly had a hard time finishing this book which is such a shame because I was really looking forward to it.

Thank you to the publisher, Hodder & Stoughton, for providing me with an ARC of this book in exchange for an honest review. Sorry I didn’t like it!