Blurb: After a tough week, Tanya Kaitlin is looking forward to a relaxing night in, but as 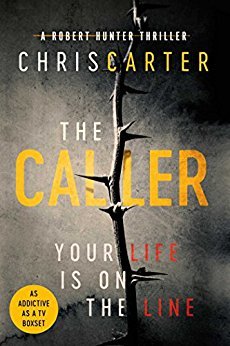 she steps out of her shower, she hears her phone ring.  The video call request comes from her best friend, Karen Ward.  Tanya takes the call and the nightmare begins.

Karen is gagged and bound to a chair in her own living room.  If Tanya disconnects from the call, if she looks away from the camera, he will come after her next, the deep, raspy, demonic voice at the other end of the line promises her.

As Hunter and Garcia investigate the threats, they are thrown into a rollercoaster of evil, chasing a predator who scouts the streets and social media networks for victims, taunting them with secret messages and feeding on their fear.

Firstly, let me say that I love crime books. Love, love, LOVE them. So, trust me when I say Chris Carter is at the top of the game. The Robert Hunter series is by far my favourite crime series and Chris Carter continues to knock out 10/10 books each and every time. Can you remember when you were younger and you’d be SO excited about the release of a new Harry Potter book? Well that’s how I feel about Chris Carter. Trust me, he’s good.

Detective Robert Hunter and his partner, Carlos Garcia work for the LAPD’s Ultra Violent Crimes Unit. So, it’s their job to catch the sickest of the sick serial killers in LA. When a young woman receives a video call from her best friend, it’s appears to be a normal call. However, the young woman soon realises that it’s not her friend phoning her. It’s a depraved serial killer who is going to torture her friend and force her to watch…. Unless she answers 2 simple questions.

Now, I’m not going to tell you what happens…. But I’m fairly sure you can guess. And I’m not going to tell you how he tortures her, because that would spoil it for you, but I’ll give you a heads up.. it’s sickening. I’ve said this before but…. Chris Carter’s books are not for the faint hearted. Sometimes they make me feel physically sick. That being said, it never fails to amaze me how he continues to come up with the sick, twisted ideas that form the Robert Hunter series.

Forgetting about all the blood and gore, the part that intrigues me most about the Robert Hunter series is that Robert Hunter doesn’t just want to catch the killers. He wants to get inside their minds and I think this is what makes Chris Carter stand out from a lot of other crime writers. He used to be a criminal psychologist and he adds elements of this into his book. You learn why the killer enjoys killing, what motivates them, what type of killer they are. It’ sounds sadistic, but I love being inside the head of the killer and trying to outsmart them. I like being able to follow Robert Hunter’s through process when he’s trying to analyse the mind of the killer. And that’s why I love Chris Carter.

He really is in a league of his own.