I absolutely love this weeks topic. I’ll admit it… it felt good to rant about books that were a massive let down!

Top 5 Tuesday is hosted by Shanah – The Bionic Bookworm. If you want to take part, head over to her blog to find out how!

The Twilight Series
I feel like this is going to be an unpopular opinion, which is why I’m getting it out the way first haha. Sorry guys! It just wasn’t my thing and I never really understood why there was so much hype for it. I honestly think that the whole series could have been condensed into one book rather than dragging it out.

Fifty Shades of Grey
Again, I have NO idea why this book was so popular. I can’t comment on whether the subsequent books were any better because I gave up. The lack of a decent story line in the first book bored the hell out of me. 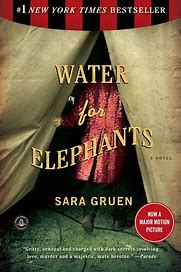 Water for Elephants
I just found this book a long drag. I found the characters boring and predictable and it felt like nothing actually happened and not in a ‘Catcher In The Rye kind of way’, where nothing massive happens but it’s still an amazing book. It was just dull.

The Girl On The Train
This book was just a huge waste of my time. It’s by far one of the worst crime/thriller books I have EVER read. I don’t even know why someone read this book and bothered to make it into movie because the storyline is so boring and predictable I’ve ever come across in a crime book. Nothing annoys me more than figuring out ‘whodunnit’ before the author reveals it.

The Taxidermist’s Daughter
Someone bought me this for Christmas one year… and I’ll be honest… I hated it. It had all the makings of a great book, but it just seems to go on forever until it got to the point where I really didn’t care about the story anymore.