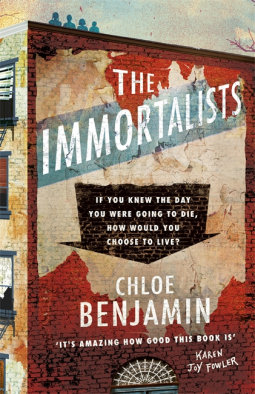 Blurb: If you were told the date of your death, how would it shape your present?

It’s 1969 in New York City’s Lower East Side, and word has spread of the arrival of a mystical woman, a traveling psychic who claims to be able to tell anyone the day they will die. The Gold children—four adolescents on the cusp of self-awareness—sneak out to hear their fortunes.

Their prophecies inform their next five decades. Golden-boy Simon escapes to the West Coast, searching for love in ’80s San Francisco; dreamy Klara becomes a Las Vegas magician, obsessed with blurring reality and fantasy; eldest son Daniel seeks security as an army doctor post-9/11, hoping to control fate; and bookish Varya throws herself into longevity research, where she tests the boundary between science and immortality.
____________________________________________________

The book starts with the four Gold siblings, Varya, Daniel, Klara and Simon, visiting a fortune teller who tells them the exact date that they’re going to die. This is told to each sibling in private, so they only ever know the date that they were given, not the dates of their siblings.

The book forces you to think: How would you choose to live your life if you knew the exact date that you were going to die? It’s a really interesting concept and the book follows the stories of the siblings and how it defined their lives.

The book itself is split into four parts. Each part follows the life of the siblings, until they die.

Some parts I struggled with but for different reasons.

I loved Simons story. It was heart breaking reading about the rejection he faced from certain family members and his untimely, but not surprising death, but it also felt so triumphant because he lived the life he had always wanted to.

I struggled to get through Klara’s section, mainly because I don’t find the work of magicians that interesting. In addition, compared to Simon’s story her section seems quite slow paced and it dragged on a bit.

Daniel’s story was interesting. He finds something out about the fortune teller which leads to one of the main events of the book. He’s the first sibling we come across who seems to be deeply troubled by what the fortune teller told him and his siblings all those years ago.

I’ll be honest, I had to skim through Varya’s section. Not because it was boring, but because it is full of grossly vivid descriptions of animal testing. She becomes a scientist who is trying to find a way to increase the life span of humans. Parts of it honestly made me feel sick and although I could tell that a lot of research had went in to this chapter, I just felt that the descriptive nature of the animal testing wasn’t needed.

One thing I would say about this book is that it is heavy. It reminded me a lot of ‘A Little Life’. It’ll have you thinking about your own family dynamics, life, death and the difference between living and surviving. It was definitely an emotional roller coaster!

I received an ARC of this book in exchange for an honest review. The Immortalists is available to buy now, so click here to get a copy!