It’s Tuesday… So it’s Top 5 Tuesday time!! This is a topic by Shanah over at Bionic Book Worm. In the spirit of Halloween, this weeks topic is Creepy Characters! So, here goes..

The Woman In Black 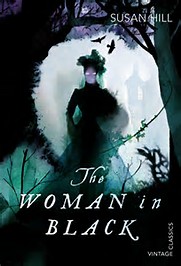 This is by far the creepiest book I have ever read. It made me scared of being in my house alone and when it came to going to bed, I was jumping at the slightest sound.

The Woman In Black is not a Casper like friendly ghost. Nor is she a ghost that roams the corridors weeping and wailing. She is such a hateful presence. She’s full of vengeance and anger and will stop at nothing if someone gets in her way.

In the book, she’s described as looking as if she has a disease that makes her look like she’s wasting away. Her skin is thin and her eyes are sunken in her head. Although her

appearance gives me the creeps, it’s her simple presence that made me scared. Knowing that she was in a room with someone of the characters made me feel really uncomfortable. I felt like I wanted to scream in a panto style: ‘GET OUT!! SHE’S BEHIND YOU!!’

You get the picture. She’s super creepy. If you haven’t read the book you should. Or watch the film. Or see the stage adaptation. All of the above. They’re all awesome.

She is in no way Dicken’s greatest character. She is not a ghost or a malevolent spirit, but my god, when I first read this book I thought she was so creepy! I still do. She was once jilted at the altar and now spends her life in a ruined mansion wearing her now old and tattered wedding dress. It’s so easy to feel sorry for her. And part of me does. 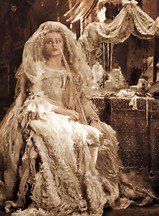 In a weird sense, she seems to think that she is an activist for women not getting their hearts broken like she did. Which is all fair enough, but she encourages girls to break the hearts of men as an act of revenge for what happened to her. So, she is definitely bitter.

She is such a haunting figure, I can’t help feeling sympathy towards her because her heartbreak has clearly led to psychological damage.

This character was the cause of so many of my nightmares when I was a child! In fact, I still think he’s super creepy.

His aim is to conquer the world and appoint himself as the leader. He thinks the world needs order and discipline and wants to create a society where love and happiness is not a thing as he views these as pointless emotions. He also wants to get rid of the whole idea of having a choice and wants to make everyone submissive. In order to help him achieve his aim, he hypnotises children.

He looks like your typical Victorian headmaster. He wears a black suit with a black teacher’s gown. He has white hair and his eyes look like pure evil. Urgh.. Yeah, I still find him creepy.

So, Amy Dunne isn’t a ghost or anything scary like that. But I can say with certainty that she is a psychopath. She finds out that husband is cheating on her, so the natural thing to do is to try and frame him for your murder… right? She will stop at nothing. She ends up killing innocent people just to get her own back on her husband. The worst thing is, she is SUCH a good liar, so she ends up getting away with it all.

The thing that scares me most is that there are people like her out there, who will stop at nothing to get revenge.

Seriously, if you haven’t read this book, go buy it and read it. You won’t regret it.

I finished this book last week and I’m still thinking about this character. Marjorie Barratt is a 14 year old girl who is seemingly possessed by an evil spirit. I say seemingly because I’m still not sure whether she was or whether she is mentally ill.

Either way, she does some super creepy things. Some of it is too graphic to go into but if you think of ‘The Exorcist’ it will give you an idea.