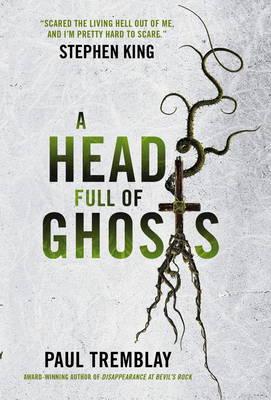 Firstly, I’d like to say a massive thank you to Shanah over at Bionic Book Worm for introducing me to this book. Shanah, you weren’t wrong when you said it was awesome!

That being said, I’m now sat here struggling to write a review because I am still in shock over what I have just read. I have so many unanswered questions!

So, while I try to gather my thoughts, I’ll explain what this book is about.

Blurb: ‘The lives of the Barretts, a normal suburban New England family, are torn apart when fourteen-year-old Marjorie begins to display signs of acute schizophrenia.

To her parents’ despair, the doctors are unable to stop Marjorie’s descent into madness. As their stable home devolves into a house of horrors, they reluctantly turn to a local Catholic priest for help. Father Wanderly suggests an exorcism; he believes the vulnerable teenager is the victim of demonic possession. He also contacts a production company that is eager to document the Barretts’ plight in a TV show called ‘The Posession’.

With John, Marjorie’s father, out of work for more than a year and the medical bills looming, the family agrees to be filmed, and soon find themselves the unwitting stars of The Possession, a hit reality television show. When events in the Barrett household explode in tragedy, the show and the shocking incidents it captures become the stuff of urban legend.

Fifteen years later, a bestselling writer interviews Marjorie’s younger sister, Merry. As she recalls those long ago events that took place when she was just eight years old, long-buried secrets and painful memories that clash with what was broadcast on television begin to surface–and a mind-bending tale of psychological horror is unleashed, raising vexing questions about memory and reality, science and religion, and the very nature of evil.’

The story is told from the perspective of Merry, who was 8 at the time. She’s telling her story to an author who is writing a book about the family, the TV show and the aftermath. This is happening around 15 years after the events.

The narrative of the book is split into three different parts. There are parts where Merry gives the author an adult perspective, however, must of the book is told from the point of view of 8 year old Merry. The third element is a series of blog posts by a blogger called Karen Brissette. Karen analyses each episode of ‘The Possession’ in a way that makes the TV show look like a gimmick horror film rather than a reality TV show. This makes you question the reality of what happened because you can’t tell which view point is accurately detailing the events of 15 years ago.

I knew I was going to love this book. I love horror films. Unfortunately, it takes A LOT to scare me but I love them nevertheless. So as soon as I read the blurb for this book, I knew it was my type of book. As I suspected, it didn’t scare me, although I can see why it would scare others. Even so, I found it so, so, so interesting. I still don’t know what side of the fence I’m on. I can’t tell if Marjorie was actually possessed or whether she was just mentally ill. Either way, it was super creepy!

The thing that secured the 5 star rating from me was the ending. I don’t mean that in a ‘I was so glad it was finally over’ way. But OH MY GOD. The ending is AMAZING. I kid you not, my mouth actually dropped open.

Obviously I’m not going to tell you what happened as it would ruin it for you. Just trust me, you NEED to read this book.

But I still have so many unanswered questions!

Was Marjorie really possessed?
Why did ‘the ending’ happen?
How come no prints were found?
Why did the room temperature suddenly drop when Merry is talking to the author about the aftermath of the TV show? Is Merry actually the one who is possessed?

Normally I’m not a fan of unanswered questions. I am one of those annoying people who like knowing the ins and outs of everything. But it kind of worked with this book and I feel like I’m going to be pondering on this for a few days at least.